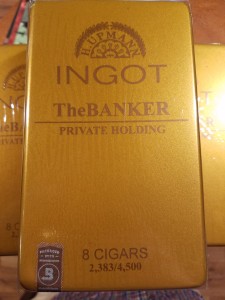 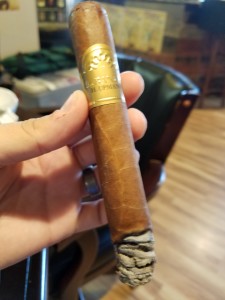 The cigar is wrapped in a striking solid gold outer band that has INGOT embossed vertically. The band easily peels away to reveal a standard cigar band that resembles the original Banker label but solid gold.  The cigar itself is features a soft box-press. The light brown wrapper has a few veins, but nothing too pronounced. Overall an attractive looking cigar. (14/15)

The aroma off the foot and pre-light draw both offer a fair amount of sweetness. The sweetness of the aroma off the foot nearly completely masks the scent of tobacco.  The first light brings flavors of sweet honey and vanilla, hay, and a very light pepper that lingers on the palette. Flavor stays fairly consistent throughout the first third, with a slight increase in pepper approaching the second third. Up until about the halfway point I’d call the flavor about a medium, and things start to ramp up into the final bit closing in on medium-full. Flavors develop about halfway through into a darker cocoa sweetness with the same dash of pepper and cedar flavors that are characteristic of Nicaraguan tobacco. (23/25)

The draw pre-light and throughout is spot on. It pulls smooth and easy through the soft box-press, with just the right amount of resistance. The burn is fairly even, but the ash is pretty loose and flakey. I had a hard time holding on to an ash longer than ¾ of an inch. One relight was required around the halfway point.       (21/25)

This was generally an enjoyable smoke and an overall upgrade from the regular H. Upmann banker.  The flavor is reminiscent with a little but more complexity and body.  My favorite part about this cigar was the thick creamy mouthfeel of the smoke and the clean cocoa finish left on the pallet after each puff. The burn was less than perfect, and the ash was very loose and flaky, but not enough to inhibit enjoyment of the cigar. (33/35)

This was a solid smoke and a fitting sequel to the Banker blend. As a limited release cigar (4500 boxes of 8 made) this is a cigar that is definitely worth picking up. I’d recommend picking up one of the 8 pack Ingot boxes because it’s a great smoke and the packaging is pretty neat.